Bologna, what to see in 2 days

It’s true: you don’t realise how deeply you love a place until you leave it. I believed that I wouldn’t have missed Bologna, that moving away would have been a relief. And it was so… for some time. Then I started looking for Bologna in every corner, in every other city I’ve visited. Bologna got under my skin, as a painful wood splinter. But that splinter has now become part of me.

What to see in Bologna in two days

I gathered in this post all the things that make Bologna a really special city. Here is what you can’t miss if you plan to spend two or three days in the chief town of the Emilia Romagna region.

Piazza Maggiore and the Fountain of Neptune

Piazza Maggiore is the main square of Bologna, its beating heart. First of all, take time to admire its stunning medieval architecture and buildings: Palazzo del Podestà with the Arengo Tower on top, Palazzo Re Enzo, Palazzo dei Banchi, Palazzo dei Notai and Palazzo d’Accursio, the town hall.

Piazza Maggiore lies next to Piazza del Nettuno, where you can find the Fountain of Neptune, symbol of Bologna. It was built by Flemish artist Giambologna in the mid fifth century and has recently undergone restoration.

Did you know that Bologna has 7 secrets? One of them lies under the main archway of Palazzo del Podestà. Face one of the columns in the corners under the Arengo Tower. Ask a friend or a passer-by to do the same, this time facing the opposite column diagonally. Now say something: the other person will hear you despite the distance. If you aren’t sure how to do it, just observe other tourists trying.

The Basilica of San Petronio on Piazza Maggiore is the sixth biggest church in Europe. Differently from nearby St Peter’s Cathedral on via Indipendenza, this is a “civic” church, in the sense that it was built by the citizens of Bologna between the 14th and 15th centuries.

Your perfect hotel in Bologna? Check this out

Its facade, incomplete for the upper part, is one of the finest in Italy, especially after the restoration which brought new life to its white and pink shades. Also the interior is worth a visit: do not miss Cassini’s sundial on the floor, nothing less than world largest sundial.

Salaborsa Library on Piazza del Nettuno is the perfect place to take refuge on a rainy day. In my opinion it’s one of the coolest libraries in Italy, a place where you can walk along bookshelves of novels and travel guides, pick up a magazine, wander dreamingly in the children’s section… Here you can find also a nice café, archeological remains, lots of events and weekly book clubs.

The two Towers: Asinelli and Garisenda

Sounds like The Lord of the Rings, doesn’t it? The two towers of Bologna, the Garisenda and the Asinelli Tower, are the symbol of the city. Like the famous one in Pisa, they’re leaning towers.

Don’t miss climbing Asinelli’s Tower with its 498 steps. Here you can book your visit and purchase tickets in advance. The view from the top is astounding. According to tradition, if you climb Asinelli’s Tower before graduation you’ll never get a degree. But I think it’s worth the risk!

How many towers in Bologna?

Not all people know that Bologna has other 22 towers, some of them “camouflaged”. In its golden centuries, there were a hundred towers in Bologna! Try to imagine it… Prendiparte Tower is one of the survivors, today an exclusive b&b and event venue.

The secret window in via Piella

One of Bologna’s best kept secret – but often featured on Instagram – is the small window on via Piella, looking down on the Reno canal. Between the 12th and 14th centuries the city was crossed by many canals that connected it to the river Po, providing the town with water.

Some of those canals are still visible today in Bologna. For example, you can see the Reno canal from via Guglielmo Oberdan and from the window on via Piella. Don’t miss it!

The old market in the Quadrilatero: shopping and food

Bologna’s heart is made of tortellini and tagliatelle, mortadella and crescentine. If diving into local gastronomy is one of your travel must, you should definitely visit Bologna’s old market, the Quadrilatero.

Deli and pasta shops, fishmongers, flowers and vegetables: the Quadrilatero is a kaleidoscope of colours, scents and flavours. Just the ideal spot for your Emilian food shopping!

The Archigymnasium and its anatomical theatre

The Archigymnasium used to be the main building of the University of Bologna. The fashinating history of this palace is told by more than 7.000 coats of arms of former students and professors that you can still see along the courtyard.

In the palace you can visit the impressive anatomical theatre, built in 1637 and formerly used for anatomy classes. Also the Stabat Mater lecture hall, with its stunning frescos, is worth a visit.

Piazza Santo Stefano is my favourite place in Bologna. On this beautiful square you can see the Basilica of Santo Stefano, also called “the seven churches”. To be honest, there are only four churches, built one inside the other, as in a Chinese box, and magnificent courtyards. It’s a perfect spot for meditation.

On the second Saturday and Sunday of the month the square hosts an antiques market: keep your eyes open!

The Giardini Margherita is the main public park in Bologna, a place where every weekend locals have picnics and go for a walk.

In the summer the beautiful Serre (literally greenhouses) host Italian “aperitivi” and events. Together with the velostazione Dynamo (bike station), they’re one of the most popular places among local youngsters and university students.

Under the porticoes, hidden in alleys and suburbs, Bologna shows her younger and sharper face. That is to say, her street art face, vastly loved and appreciated in the city.

Everyday in Bologna new graffiti are born: at this address you can find an almost complete map of Bologna street art. Don’t forget to visit via Stalingrado Bridge, all covered in graffiti.

The longest portico in the world: the Santuario of San Luca

There are 53 km of porticoes in Bologna: this means that on a rainy day you can always stay dry. The most famous portico is that of San Luca, which with its 3.796 metres it’s also the longest portico in the world.

Our advice: spend half a day of your trip visiting this spot. You can get a bus to Porta Saragozza and start climbing the hill from there up to the colle of the Guardia. Wear comfortable shoes and bring water with you. On the top of the hill you’ll find the Sanctuary of the Madonna di S. Luca: from there the view of Bologna has no equal.

The Certosa of Bologna

Last but not least, plan a visit to the monumental cemetery of Bologna, called the Certosa. It’s located outside the city walls, at the foot of the colle of the Guardia. Its monumental tombs and courtyards are incredibly suggestive.

Where to eat in Bologna

Let’s now talk of serious matters: you can’t spend two days in Bologna without enjoying its typical products, especially fresh homemade pasta prepared by local women, the so called “sfogline”. Where to eat in Bologna? Here are some addresses to check out.

In conclusion, enjoy the city in the open air, filling your eyes with its incredible colours, breathing its laid-back and creative atmosphere. You may find also interesting exhibitions in one of the local museums: check the event calendar on this website.

Do you have any questions? Leave a comment and we’ll reply. Have you ever been in Bologna? What did you like the most? 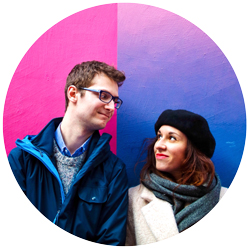